Poor sower of seeds with a gift for dreaming, Jacko Jacobus knows that his destiny is to found a people to shake the nations. But when he has to flee Jamaica to escape his brother's wrath, he finds himself pushing crack for his Uncle Al in South Carolina. In writing his dub version of the myth of Jacob and Esau, Kwame Dawes builds on a gripping narrative of prophecy, love, deceit and murder to address contemporary Caribbean realities; and in portraying the conflict between Jacko's trickster, anancy inventiveness and the narrow righteousness of his brother Eric's path, he explores the universal tensions between Jacko's sense of duty as the chosen instrument of God, and his desire to make his own way, whatever the consequences.

'The Caribbean is finding a big new voice of alarm in Kwame Dawes. Jacko Jacobus is a long rollickingly control biographical-political-erotical epic - a novel in two-line verse-form almost - but always a poem - inspire by that most socially intriguing of Old Testament Bible "prophets", the story of Jacob and Esau
- Kamau Brathwaite.
'Kwame Dawes has drawn from the Bible in his own way. His "hero" moves from being a pusher in the U.S. to a seller of condoms and Hustler magazine back in Jamaica. Still, he survives, and so does the young poet, for "Every creator is a trickster." There is a moral point of view in the poem/novel, but it is not a conventional one.'
-Peter Nazareth 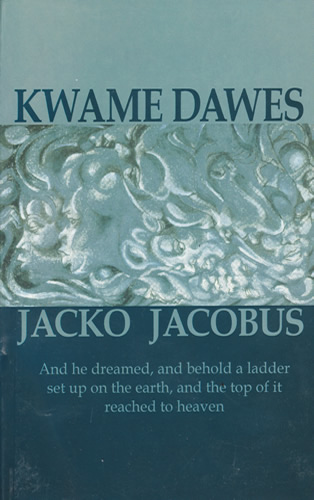