Natural Mysticism: Towards a Reggae Aesthetic

Natural Mysticism is also a work of acute cultural analysis. Dawes argues that in the rise of roots reggae in the 1970s, Jamaica produced a form which was both wholly of the region and universal in its concerns. He contrasts this with the mainstream pf Caribbean literature which, whilst anticolonial in sentiments was frequently conservative and colonial in form. Dawes finds in reggae's international appeal ,ore than just an encouraging example. In the work of artists such as Don Drummond, Bob Marley, Winston Rodney and Lee "Scratch" Perry, he find a complex aesthetic whose inner structure points in a genuinely contemporary and postcolonial direction. He identifies this aesthetic as being both original and eclectic, as feeling free to borrow, but transforming what it takes in a suversive way. He sees it as embracing both the traditional and the postmodern, the former in the complex subordination of the lyric, melodic and rhythmic elements to the collective whole, and the latter in the dubmaster's deconstructive play with presences and absences. Above all, he shows that it is an aesthetic which unites body, emotions, and intellect and brings into a single focus the political, the spiritual and the erotic.

In constructing this reggae aesthetic, Kwame Dawes both creates a rationale for the development of his own writing and brings a new and original method to the discussion of the work of other contemporary Caribbean authors including Lorna Goodison, Mervyn Morris, Anthony MacNeill, Michael Thelwell and Dennis Scott.

Natural Mysticism has the rare merit of combining rigorous theoretical argument with a personal narrative which is often wickedly funny. Here is a paradigm shifting work of Caribbean cultural criticism with the added bonus of conveying an infectious enthusiasm for reggae, which will drive readers back to their own collections or even to go out and extend them 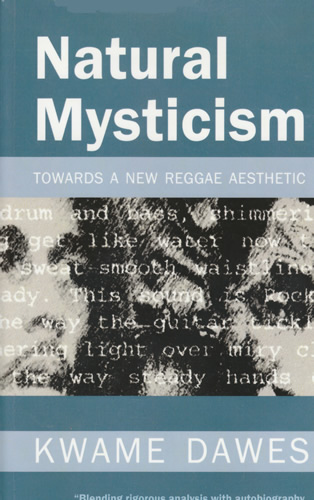